The oven at the factory site of Hudson and Middleton (Longton) Ltd., was chosen for the Last Bottle Oven Firing for a number of reasons. 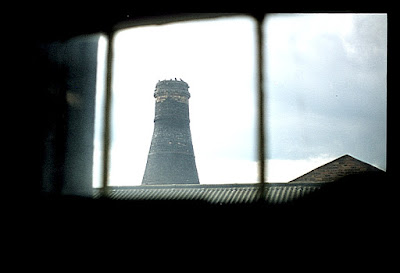 The Sutherland Works is a Grade 2 Listed Building. The bottle oven used in the Last bottle Oven Firing is known as a skeleton oven. More about oven types here>

The skeleton oven looks, at first sight, very similar to an updraught stack oven. But it is constructed completely differently. This updraught skeleton oven tended to be preferred by pottery owners since it was easier and less expensive to maintain. Work could be carried out on the firing chamber without affecting the chimney.

In an updraught skeleton oven the chimney (hovel) is built from ground level, very close to the firing chamber, with just about a one brick-width gap between the two. The firing chamber was therefore completely separate from the chimney and could be easily maintained or knocked down and rebuilt. This simple graphic shows the differences. 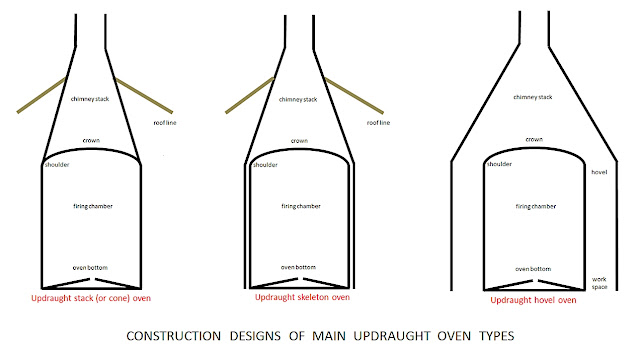 In comparison, the diagram below shows the layout of an Updraught Hovel Oven. It is the type of oven you can see and explore today at Gladstone Pottery Museum in Longton, Stoke-on-Trent. The diagram shows that the oven itself is separate from its stack.


The two ovens were operated in essentially the same way.

Technical Spec - The oven for the last firing

Use - the oven was originally used for firing china biscuit. For the Last Bottle Oven Firing it was used to fire glost earthenware pottery so that finished pottery could be seen and sold.

Anatomy of the Firemouth

The image below shows the various parts of one of the eight firemouths in the bottle oven used at the last firing.


For definitions of the special words used in this blog please refer to the Potbank Dictionary > https://potbankdictionary.blogspot.com/