All of the saggars used in the Last Bottle Oven Firing were specially made for the event THE DIAMOND CLAY CO. LTD of Hartshill, Stoke-on-Trent.

Careful planning went into ensuring the correct quantity and shapes were ordered for this specific firing. The inside walls of each saggar were washed with glaze before the firing (to prevent the porous saggar effectively 'sucking glaze' from the products it contained) and the top rim and bottom edge of each was smeared with 'slop bone' wash (to prevent wad clay sticking to saggars in the bung.)


32 Round hiller saggars and round bats

The trial layout of saggars in the oven

On Saturday 22 July 1978, at 09:00, Mr. Alfred Clough (Fireman responsible) together with a team of volunteers, planned the layout of saggars in the bottle oven which was to be used for The Last Bottle Oven Firing in The Potteries.

The oven at Hudson and Middleton Ltd. had not been fired since the early 1960s. Little was known about how it was used or how saggars were placed in the oven. The trial layout concluded that the following saggars were needed and how they were to be laid out:

THE POSITION OF WARE IN THE OVEN

During the firing of a bottle oven some areas became hotter than others. It was found impossible to ensure all quarters of the oven were consistent. Mr. Clough, the fireman, together with Ted Lockett, the Cod Placer, discussed the position of particular wares in particular places. White ware would be placed in hotter spots. Wares with coloured decoration needed relatively cooler spots if the colour was to survive. 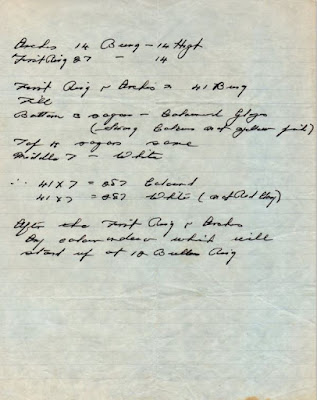 NOTES ON THE MANUFACTURER OF THE SAGGARS

This firm was established in Stoke in 1933 to supply prepared saggar marls to the pottery industry. These marls, made from Scottish fireclays, produced saggars which gave better service than the traditional saggars prepared from local clays.

The Diamond Clay factory at Hartshill (between Stoke and Newcastle-under-Lyme) specialised in the production of high-fired saggars.

Batts, props, setters, and other types of furniture were produced to meet the specific requirements of customers in the China, Earthenware, Porcelain, Tiles, Sanitaryware and allied industries at home and abroad.