The Last Bottle Oven Firing was the brain child of David Sekers. The idea came to him shortly after he was appointed Director of the Gladstone Pottery Museum in 1973-1974.

In 1976 Sekers set about testing his ideas with many of the industry leaders and experts who were supporting Gladstone.

Was it feasible? Did a bottle oven still exist which was in working order and which could be used? Could  permission be obtained from the Environmental Services Department to hold such an event? How much would it cost? Could funds be generated to help Gladstone's Charitable Trust? Do sufficient people, with the necessary skills, still survive and are they fit enough to place, fire and draw the oven?

So many questions. After much deliberation and debate it was deemed possible, "but only once!"

A suitable bottle oven was identified on the site of Hudson and Middleton (Longton) Ltd., Sutherland Works, Normacot Road, Longton, Stoke-on-Trent. The oven was found to be in 'working condition' and was complete with the equipment necessary to fire it. It had last been fired in 1963 and pigeons had occupied it since then.

David Sekers wrote and published a leaflet  - "Proposed Kiln Firing. What you should know" 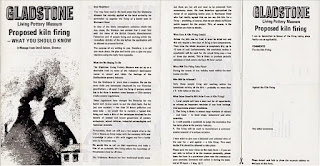 The Survey of Neighbours. In May 1977 David Sekers (Gladstone Pottery Museum Director), Pam Bott (Gladstone Pottery Museum Curator) and Terry Woolliscroft (Volunteer) made a house-to-house survey of the neighbours immediately surrounding the bottle oven which had been proposed for the firing. Without their agreement to the event it would not be possible for it to go ahead.

Properties in Gower Street and Chadwick Street, Uttoxeter Road, Warren Street, Normacot Road, Beaufort Road, and the park side of Lightwood Road were surveyed. The boundary of the area was defined by Eric Hambrook, Stoke-on-Trent's Director of Environmental Services.

The survey was required to establish 'No Objection' from people living within the 'near surroundings' to the oven. The survey revealed only one objection - from a couple living immediately adjacent to the factory but their objection was later withdrawn. Signatures were obtained from the neighbours to show that they had no objections to the event. The firing was able to go ahead and a date was set - August Bank Holiday 1978.

Mr Alfred Clough, the retired pottery owner and kiln firing expert, was invited by David Sekers to fire the oven and direct the proceedings.

Gladstone's Engineering Volunteers begin work on the bottle oven site to prepare it for the event. Pigeons had been in occupation at the site for at least 15 years, it was last fired in 1963. Bird eggs and lots of pigeon poo was found on the crown of the oven. "Muck by the ton." Clinker from its last firing was found in the oven mouths and asholes.  The engineers built a roof over an area which would be used by visitors during their tour of the site when the oven is being fired.

Announcement in The Friends of Gladstone Newsletter

"Bottle Oven Firing - a Date for the Diary

Stand by between August 26 and September 3 1978 - the dates provisionally selected for the firing of a bottle oven in Longton. The essential permissions have not been witheld, local people are vociferously in favour and a major planning exercise is now underway to ensure that the operation will go smoothly. It will never happen again, so do not miss it this time."

Gladstone's Engineering volunteers (together with volunteer helpers from Werrington Detention Centre, Ash Bank, Stoke-on-Trent) continue work on making the bottle oven useable and visitable. Working parties at the Hudson and Middleton, Sutherland Works, were arranged for every Thursday evening and every Saturday morning during the late spring and summer.

PLACING JOBS:
Placers required on Saturday, Sunday Monday. 09:30 till 16:30 with half hour lunch

Required from Tuesday lunch (12 noon) through the night to Wednesday evening 22:00
Mr. Hill will take the night shift but will not be able to do any baiting shovelling himself - suggests 3 assistants required on that shift.


12 August 1978, Saturday at 10:00 at Hudson and Middleton
Final meeting of ovenmen and placers, at the oven site. Briefing all.
Press invited. Now two weeks before the event.

Gladstone Pottery Museum remained open every day, 10:30 till 17:30, during the Last Bottle Oven Firing. Extra demonstrations of pottery making and decorating, mould making, modelling and saggar making were laid on. In addition there was an exhibition of old photographs of the Potteries by E.J.D.Warrilow.

DAY 1
08:00  First arrivals at the site for final final preps. The barrier rails which were removed yesterday were put back! Display boards erected around the intermittent gas ovens [which were adjacent to the bottle oven] Final sweeping and erection of signage.
08:30  Set off to collect a 2nd load saggars from Gladstone. Then five more such journeys before lunch. By then 500 'ovals' had been brought to the site, each containing commemorative Gladstone tygs.
09:00  Volunteer placers start arriving. Slops, and aprons (overalls) issued. Placers raring to go.
09:50  Placers start their work. Eight placers start placing [ware into saggars and full saggars to the oven]. Arch bungs [between the bags] at the back of the oven were set out first.

10:00  The first members of the public start to arrive and gain entry for a first look at what's going on. Then members of the press, Radio Stoke, and the Aston University Film Crew start filming. Good progress all morning, in fact the volunteers were working too hard and too fast!


11:00  1st ring started. Visitor numbers low at the moment.
12:00  Half of the placers take half an hour lunch break. Then the other half have theirs at 12:30. Shift work!
13:00  General call to all the placing team to go slower. Placers working just how they used to. Too fast. "Go Slower" for the benefit of the paying public!
13:50  Trip to Gladstone to fetch more flatware for placing. All submitted ware now brought across from the museum. Some confusion about cranks. Not enough. More Gladstone cranks sent for. "2nd trip to fetch more empty round saggars for cranking flatware. 3rd trip to fetch more Gladstone-produced flatware. Also 'bobs' brought for trial holes.
14:30  2nd ring started (already!) Saggars with holloware still being placed.

16:00  First day's placing finished. Clocking off time! Most placers go home. Still a lot of visitors around. Decision made to allow public inside the oven to see what has been going on at first hand. Ted Locket (cod placer) still inside the oven describing what is going on.
17:00  Public still arriving!
18:00  Approx close. Everyone goes home after successful day with 440 fee paying adults through the turnstiles - and its only the first day. Success!

DAY 2
Placing continues throughout the day. 3rd ring set in.

Placers are very keen and still working too hard and too fast. Bless 'em! 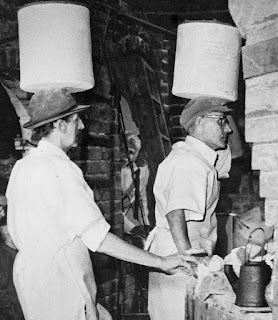 10:00  Open for visitors. Busy.
10:00  Billy Ryan (builder) begins bricking up the wicket to form the solid doorway to the oven called the clammins.
10:30  Building the kindling for each firemouth commences. Carried out by oddmen. Mr Clough gives instructions. Lots of dry newspaper first. No wood sticks yet. Coal still arriving in wooden barrows, distributed around perimeter of the oven.
12:10  Billy still building clammins. Making it last a long time for the benefit of visitors. Daubs and covers brickwork with clay/sand mix to seal against air holes.

Dr. Mike Kennedy, and his assistant Dr. Ian Tams, of the Department of Respiratory Physiology, City General Hospital, Stoke-on-Trent, arrive to attach special sampling tubes, with brown gaffer tape, to the slops of some ovenmen. Dr. Kennedy wanted to sample the foul air and dirt in the atmosphere during the firing to further his research into the incidence of pneumoconiosis in the pottery industry. This was an opportunity which he never thought would come his way!

14:30  More coal arrives (about 1 ton) and distributed around the oven for use later and for the 'show'. Distribution made with wooden wheelbarrow.

15:30  Oven doing well but ahead of schedule. Against John Hill's wishes the doors were reopened to try to slow down the ovens rate of temperature rise. No.2 firemouth emits clouds of sulphurous smoke. Thick yellow clouds issue from the base of the firebars in the ash hole.
15:30 Sulphur! Thick clouds of smoke fill the placing shop - due to 'top kindle.'
16:50  Sulphur smell still coming from No.2 mouth. Brickwork still cold.
17:10  Mr Clough returns. Closes all oven doors.
17:15  Mr Clough walks round the oven clockwise. Inspects each firemouth in turn. Closes firedoors shut.

17:42  Mr Clough walks around once more. Notices coking on top of the fuel beds. Uses poker to break the coking.
17:53  Breaking the top coking of fuel on the firebed complete. Puffy smoke still being produced
18:16  Mr Clough walks around oven. No.4 mouth is burning away, ahead of the other mouths. Therefore a smallish bait (top up) is required, just in the GLUT. Four shovel fulls. Also required in No.7 Mouth. 3 shovels. Doors jacked open (slightly opened.)
18:30  No.4 mouth firedoors closed up. No.7 mouth doors still jacked open.
18:35  No.7 mouth firedoors closed.

19:00  Mr Clough takes a tour of the oven. "Jack. Level off at 7.45 to 8 o'clock to make OK for next baiting".
19:16  Mr Clough takes another trip around the oven. Observing. Some concern? Opens firedoors and pokes fires.
19:21  Mr Clough says "Commercially, we would have had a couple of baitings by now. But for the show this is what we have [specifically] not done. The aim being to slow it all down." Purposely loosing time.
19:30 This was the 1st BAITING starting at No.1 Mouth. Doors jacked to allow heat from oven to reduce prior to loading coal.
20:15 Finish baiting [45 minutes for 8 mouths = approx 5 minutes per mouth]. 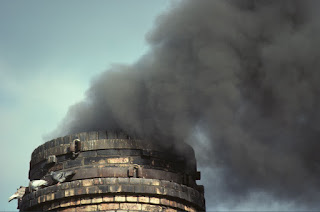 20:20  Mouths are hot and therefore full of smoke. Doors opened. Regulator slides off.
20:22  All dampers fully closed.
20:49  Mr Clough signs off for the day. Leaves responsibility to night firemen Jack.

05:05  All slides on regular holes closed.
05:30  First Trail Bullers Rings taken. No.2 quarter is too far advanced [compared with the three other quarters] To slow it down more air let in with firedoors jacked.
05:56  Mr Clough arrives. Tours oven to inspect. Views through doors. Checks trial Bullers rings just taken. More trial rings taken. Placers and oddmen start arriving.
06:10  Oddmen sent to tour the entire factory, including upstairs. Checking for fire risks.
06:30  Mr Clough announces that the oven is "Just below 1000C in the bulk of the oven"

06:50  Jacking doors in No.2 Quarter to slow it down again. No.4 Quarter also had firedoors jacked to "keep it back."
07:06  Breakfast time!  Bacon frying on baiting shovels.

08:00  Firedoors partially closed - all jacked open.
08:55  All firedoors fully closed.
09:15  All slides on regulators fully shut.
09:25  Mr Clough makes tour of the oven. No change.
09:31  Dampers raised  (By Mr Les Dennis) prior to drawing first Bullers Ring trials and the next baiting.

12:14  Trial rings taken from four positions in all quarters of the oven. Mr Clough say "little change from last trials"
12:34 "Bottoms not changed but middles have". All dampers closed tight shut or slightly cracked.
12:41  Mr Clough inspects oven mouths and decides rake and break the coking on No.1 firemouth.
12:50  Decision made to do the next bait as a big one. Preps proceed. No.4 bars uncovered therefore baiting for bottom. No.2 - baiting for bottom. No.1 baiting for top. No.3 baiting for top.
12:53  All dampers raised open.

19:30  Mr Clough declares the firing done. Doors open. Dampers open. [Mr Clough and many other take a walk to the Sailor Boy for a well earned pint. Much merriment. "It ain't gonna smoke no more, no more!"]

22:00  Clammins down to allow rapid cooling and create good glaze, at the risk of some thermal shock. 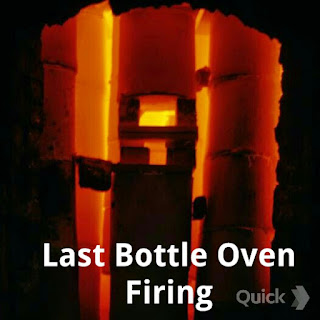 DAY 6
Rest day and start of tidy up

DAY 7
Rest day and start of staging build
Staging created (as usual) to make job of drawing the oven quicker, easier and safer. Unused saggars were smashed at Gladstone.